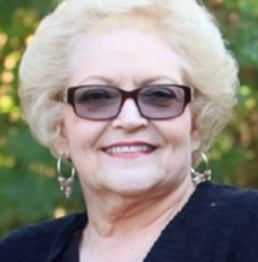 Sharon was the daughter of the late Mitchell and Nancy Tate. Sharon is proceeded in death by two of her brothers Dennis A Tate and David M Tate.

Born in Key West Florida, Sharon’s father was a commercial fisherman. She grew up all along the Gulf Coast. She spent most of her earlier years in Aransas Pass, Texas. Her parents moved back to her father's home area in Bath, NC while Sharon was in high school. It was from here that she followed her life’s dream to be involved in the ministry of the Lord. Sharon went to Faith School of Theology in Maine. It was here she met and married her husband James L Schuelke. Sharon and Jim not only graduated from F.S.T. but also were instructors for twelve ½ years. While instructors at F.S.T. Sharon and Jim not only taught but also did evangelism from Texas to California. They ministered weekly in churches throughout the northeast. Sharon’s singing, her southern charm, and love for the lord touched the hearts of many. Her singing will be remembered for years.

In 1987 a change came as Jim, Sharon, and family began pastoring at Inwood AG. She has been a gracious pastor’s wife until her passing. Sharon expressed a special love for her congregation and her congregation loved her.

If you know Sharon, you know that the loves of her life were her grandchildren. Shanel Rose, Emma Loren, Tristan River, Ciara Trinity, and Havannah Dalyn (Rebecca and Clint’s children) Jordyn Lynn and Zion James (James and Katie’s children) Her grandchildren were the apple of her eye. Sharon was the happiest watching one of them playing a game or riding a ride. Sharon better known as Nanny will live forever in the hearts of her grandchildren

Sharon and Jim not only had their own two children, but their home was always open to young people. Sharon was known as Momma, Nanny, and Glammy. Sharon made the holidays special not only for her own family but for many.

Sharon will be missed but her legacy will live on for eternity.

Celebration of her life:

Gathering following the service at the multi-purpose building


A second service will be held in North Carolina. Her resting place will be along with her mother, father and two brothers at the Tate Cemetery.