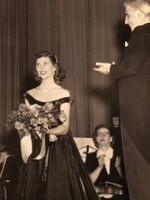 In 1950 she married William Baldwin Snyder, Jr., editor of The Shepherdstown Register, and moved to Shepherdstown, where she spent the rest of her days. Following his death in 1979, she became President of his company, Hagerstown Bookbinding and Printing Company. She is survived by her two children, Martha Snyder Byron of Alexandria and John Wiltshire Snyder and wife Hope of Shepherdstown: and five grandchildren, Virginia Faulkner Byron, James Edgar Byron III, Stephany Rossi Snyder, William Baldwin Snyder IV, and Isabella Ines Snyder.

Mrs. Snyder is a descendant of Charles James Faulkner and Mary Waggoner Boyd, daughter of Colonel Elisha Boyd, who built "Boydville" on Queen Street in Martinsburg. Charles James Faulkner represented Berkeley County in the Virginia General Assembly beginning in 1838 and in the United States House of Representatives in 1851. President James Buchanan appointed him Minister to France in 1860, and in 1875 he served in West Virginia's House of Representatives. His son C. J. Faulkner Jr. represented West Virginia in the United States Senate in 1887. C. J. Faulkner Jr.'s daughter, Jane Faulkner White, was Mrs. Snyder's grandmother and was also a life-long resident of Martinsburg.

Mrs. Snyder's choice of the CB Radio handle "Songbird" best describes her life as a professionally trained coloratura soprano. She attended Wilson College, Chambersburg, Pennsylvania, on a piano scholarship and later finished her degree at Shepherd College. She began her singing career as a soloist in 1953 with the Charleston Symphony, West Virginia, before expecting her first child, and she continued her voice training in Baltimore and New York City with Igor Chichagov, alumnus of the St. Petersburg Conservatory. She sang with the Baltimore Opera Company under the direction of Rosa Ponsell and later with the Washington Opera Company in the lead roles of Susanna in Marriage of Figaro and Gilda in Rigoletto under director Adelaide Bishop. Three summers in New Hampshire she sang the lead in Sound of Music, King and I, and Merry Widow. She continued giving voice recitals locally, including a performance at Shepherd College with accompanist Guy Frank. She was instrumental in the restoration of the Martinsburg Opera House, and she directed and participated in performances of Oklahoma and Sound of Music for Berkeley County Civic Theater.

Mrs. Snyder sang as a soloist with Lutheran and Baptist choirs in Martinsburg and directed the Shepherdstown Presbyterian junior choir program. Her junior choir members named themselves "Glory Bound" and took their performance of "Cool in the Furnace" on a local tour. Prior to the pandemic, Mrs. Snyder remained active in the choirs for First Presbyterian Church, Martinsburg, and Mt. Zion Assembly of God, Charles Town. She was dedicated to spreading the joyful word of God through her music direction and glorious singing.

The family is requesting that, in lieu of flowers, donations be made to Hospice of the Panhandle, 330 Hospice Lane, Kearneysville, West Virginia 25430, where Mrs. Snyder spent her final days peacefully surrounded by the love of her family, who will miss her dearly.